In this article we will try to expand a little bit more on some of the meanings of the spiritual seclusion (khulwa) in the Tariqa Karkariya.

Sidi Shaykh Mohamed Faouzi Karkari says: “the Spiritual Seclusion means not leaving your own living tomb. Abandoning all your physical senses to be completely immersed in a journey to Allâh having for equipment only, the remembrance of his Name (Allâh) and being in a complete seclusion. During this journey, you penetrate into your own spiritual heart and you accede to the Lord’s assembly. The journey will last until the veil is lifted so the Innervision becomes sharp in the face of the eternal source.” [1]

What does it mean to don’t leave your own living tomb?

These two Hadiths hint to the fact that the one who is seeking Allâh has to build barriers to lock himself away from the desires of the ego (in fact, the one who dies does not have any more choices to make nor things to plan). Then, he could stay with the Almighty behind the barriers of this prison, which is his tomb, to taste a moment of “true life”.

The end goal of the khulwa is to encounter Allâh. This encounter, however, cannot be done without “abandoning all your physical senses”, as the Shaykh writes next. Only the one who died, leaving his senses behind, the one who freed himself from the constraints of the directions (time and space), and completely extinguished his ego could gain the favor of “standing” with Allâh.

That is why our Shaykh says in his book the founding principles of the Tariqa Karkariya: “Oh Disciple come to our appointment without yourself, come when nothing in yourself still stay in yourself.” This way the one who is seeking this moment of pure presence with the Almighty will be prepared “to be completely immersed in a journey to Allâh having for equipment only, the remembrance of his Name (Allâh).”

Revelation informs us that Allâh chose and wanted for us, in the world of pre-eternity, this meeting and allowed us by his boundless mercy and generosity the means to access his divine presence. On the other hand, even before coming down into the physical world, every slave and servant of Allah had a moment of complete witnessing of the Eternal One. As our Shaykh says: “In reality, there is for every living spirit a time of unveiling and theophany, of favor and of divine presence, established before the creation.” He also says: “The wisdom of Allah wanted to gratify one of his slaves to choose a moment for him to rid him of his carelessness. it burns the heart of the passions of repentance and then the defilements of the bay’n (heart) are dissipated with the fire of passion.” and he also says: “that this moment of meeting made it to draw your beginning and to show you the secret behind your governance however Allâh Him is above space and time.” [4]

Many of the famous Saints of Islam seclusion still stand today. They are still visited and used by 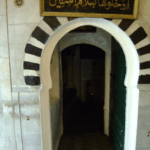 Muslims, who seek the blessings that Allâh has filled the place with through His Saint. For instance, the place of seclusion of Sidi Abu al hasan shadhili ﷺ – may Allâh sanctify his secret – (one of the most famous sufi masters of his era and one of the Tariqa Karkariya links in its chain of transmission) could still be found in Tunisia. Sayida Nafisa, may Allâh sanctify her secret, one of the most famous and most celebrated female Wali in the Muslim World, had her own secluded space for khulwa in Cairo that still stands today and that is still visited by millions of lovers every year, seeking the sayida’s blessings. (we already have shared in the previous article examples from the Prophetic traditions).

Being free from your wordly attachments and physical senses, being secluded and having for only equipment the remembrance of the Name, the one who is seeking Allah “penetrate into [his] own spiritual heart and [he] accede to the Lord’s assembly.” Like hadhrat Musa, peace be upon him, he will taste the secret of Theism (uluhiya). Sidi Shaykh says: “When the moment of the appointment and the time of Musa’s ﷺ extinction have arrived, the tastes of passion submerged him, he heard the gentleness of the word, he finally was annihilated because he could not resist to the divine magnificence. He ascended through his secret to the sidr of lovers transported by the beauty and the power of what he heard… Heﷺ then asker the ruuya (the vision).”

“So, Allah said: “By no means canst thou see Me (direct); But look upon the mount; if it abide in its place, then shalt thou see Me.” When his Lord manifested His glory on the Mount, He made it as dust. And Moses fell down in a swoon.”” [5]

Our beloved Shaykh may Allah sanctify his secret says: “the reason of the negative answer to the request of Hadhrat Musa is that the Attributes of localization and the attributes of distinction that are not allowed by the mystical truth of oneness and the divine sublimity.”

Sidi Ibn ‘Ajba Al-Maliki, 18th-century Moroccan saint and scholar, may the Almighty sanctify his secret, said: “the secrets of the essence can only be manifested through the light of Attributes because if they appeared without any intermediary (wassita), the created things would have been totally burned and annihilated as it is said in the hadith : “His Veil is Light, and if He were to remove it, the glory of his Face would burn everything of His creation, as far as his gazes reaches.”” [6]

That is why our beloved Shaykh says: “The journey will last until the veil is lifted so the Innervision becomes sharp in the face of the eternal source.”